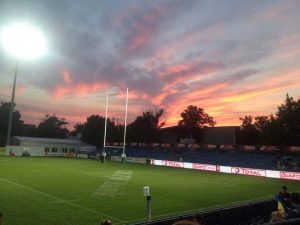 The death of Romanian rugby often pops up as a topic in various English-language forums and social media discussions about Tier 2 nations. Most fans in the West don’t know anything else about rugby in Romania: just that it used to be very strong in the 70s and 80s, when the national team was denied entry in the 6 Nations Tournament, only to decline and disappear after the fall of communism.

This perception was false. Romanian rugby did become a lot weaker after the old sport structures were dismantled, but continued to fight on with very scarce resources. Without any external support, the union set up a small professional domestic club league that provided the Oaks with a constant supply of players able to compete at international level. After reaching the lowest point around 2008-2009, when Romania was in real danger of not qualifying to the Rugby World Cup for the first time in its history, the national team started to slowly climb back.

As we speak, the Oaks stand on #17 in the World Rugby official ranking, not far behind Italy. Last year, Romania defeated much-hyped rivals Georgia and won the European Nations Cup, a tournament known as the 6 Nations B. After many years, the national team had the opportunity to tour during the summer, with a clear win over Canada in Edmonton and a respectable loss in Japan.

Local fans had many reasons to be optimistic for the next World Cup, where the Oaks were scheduled to play in the great opener against the hosts. Little did they know that the long-anticipated death of Romanian rugby was just around the corner at the hands of World Rugby, the very institution that was supposed to protect and help the game grow in the minor nations.

World Rugby has always treated Romania as a black sheep. The Oaks were denied any opportunity to develop and consistently had the worst schedule of all Tier 2 nations. While even #21 ranked Canada got to play one or two Tier 1 tests every year, Romania did not play one since 2006, 12 years ago! The national team only got the chance to play top opposition at the World Cup, once every 4 years, without any advance preparation.

Before the 2015 Rugby World Cup for example, the Oaks had a single proper test (Tonga) and had to play warm-up matches against club sides. After the RWC, the test allocation continued to become weaker. While all other Tier 2 nations were granted matches against the world’s best, Romania did not even have a full schedule in 2017, having to play a meaningless home test against Brazil in June, followed up by just two games in November, instead of the usual three.

World Rugby has always been keen to promote the sport in other countries with rich or very large markets, such as Spain, Germany, Russia or Brazil. Romania’s determination to keep qualifying for every World Cup was probably seen by some people as an obstacle in the development of these nations. Last month, World Rugby suddenly had an opportunity to interfere directly in the qualification process and get rid of this unwelcome guest.

It all started after Spain lost their qualification match in Belgium and blamed the Romanian referee for it. They argued the referee was not neutral since Romania had a direct interest in the match and that he was appointed through corruption, since the president of Rugby Europe is also Romanian. A massive online campaign of disinformation started in support of Spain’s request for a match replay, enthusiastically supported by a part of the English-language media as well. Numerous invented “facts” were repeated time and time again, for example that the penalty count was 28-5 against Spain (in reality it was 18-8).

Very few of the people who jumped on the bandwagon actually bothered to watch the match or check the facts. The referee was appointed one year in advance, not by Rugby Europe’s president but by its referee board led by a Frenchman. Spain wasted many chances in the match and eventually lost it due to their own nervousness and choking, not the referee. The referee’s performance was labeled “the worst in history” but Spain’s supporters were unable to point any significant mistakes and the videos produced to support their claims only show a few marginal calls at best.

However, this was only the beginning. As an official investigation was starting, Russia sent an official complaint to World Rugby accusing Spain, Belgium and Romania of fielding ineligible players. After a very long time, the findings of the independent Judicial and Disputes Committee were announced: all three national teams were disqualified. Russia will go to the World Cup while Germany, a team that was defeated 85-6 by Romania on the pitch, would make the playoffs.

In Romania’s case, the ineligible player is Sione Faka’osilea, a centre of Tongan origin who was selected to play for the Oaks using the residency rule. Back in 2015, the Romanian union checked his eligibility with World Rugby and was instructed to contact Fe’ao Vunipola, the chairman of the Tongan Union. The Tongan official confirmed that the player was eligible to play for Romania and Faka’osilea signed the mandatory declaration that he never played for Tonga and was never announced of being capped for his native country.

It later emerged that Faka’osilea actually played for the Tongan 7s national team in a tournament, so he was ineligible for any other country, which served as basis for Romania’s disqualification.

This harsh decision makes absolutely no sense. It is obvious that the Romanian rugby union acted in good faith and did all the necessary due diligence, as instructed by World Rugby themselves. What was the union supposed to do, hire private investigators and send them to the Pacific island to dig deeper? Faka’osilea even played in a test against Tonga in 2017, without anyone questioning his eligibility.

The Committee argued that Romania did not specifically asked if the player was capped by the 7s national team, which is one of the most bizarre claims ever. There is no such requirement in the World Rugby regulation, the question sent was clear: “Is the player eligible or not?”, which obviously includes 7s as well. The answer was crystal clear as well, confirming his eligibility.

By contrast, the unions of Spain and Belgium did not follow the procedures at all. They were unable to prove that they checked eligibility with the native federations of their players, while the players themselves never signed the mandatory declarations, or did it only after the tournament. It is obviously wrong to treat a union that followed all regulations the same as unions that ignored them completely.

Romania is being denied the qualification obtained on the pitch, after years of hard work with minimal resources. If the decision stands after the appeal, the union would lose more than one third of its annual budget, with disastrous consequences for the sport. It would be a shameful end of the proud tradition of the Oaks, who were the only Tier 2 nation to play in every Rugby World Cup since the start of the competition.

It doesn’t have to end this way and everyone who loves rugby and its values should support Romania in this struggle. If anyone is to blame here, it’s World Rugby themselves. Not only they were not able to maintain a simple database of players that would allow instant eligibility checks, but their regulations are unclear and confusing. Developing the game in Germany or Russia is important, but that doesn’t have to happen over the dead body of Romanian rugby. 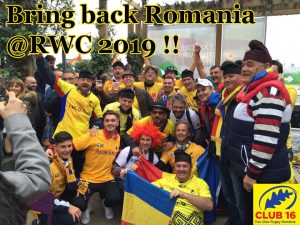 The Romanian rugby supporters grouped in the Club 16 fanclub are upset by the World Rugby decision and have begun in the on line campaign #BringBackRomania@RWC2019 in attempting to draw attention to the unprecedented harsh decision over ineligibility matters from May 15, 2018 when the dispute committee deducted the maximum amount of points despite the obvious mitigating factors and lack of any other infringements of WR regulations throughout the history of Romanian rugby that debuted in 1913.

2 Replies to “Is this the end of Romanian rugby?”